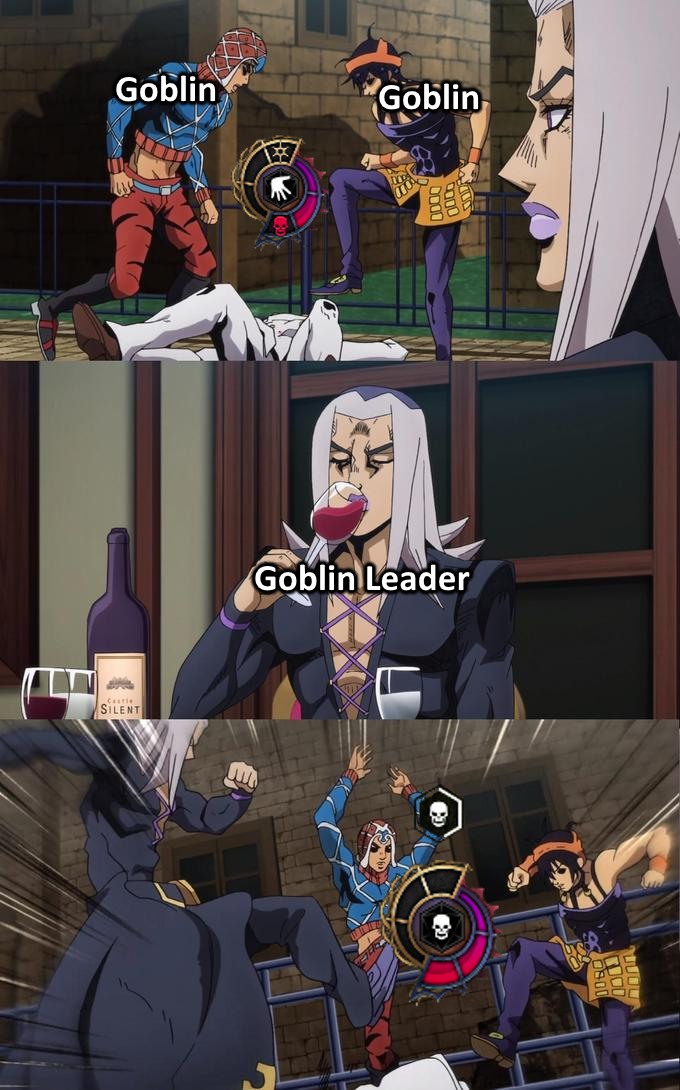 It's about how the AI loves to bully downed characters, by focus-firing them.

How about this one?

Originally Posted by Newtinmpls
I get it, but I disagree
Meh. There isn't really much to "agree" or "disagree" about.
It's just a factual observation about the game behavior in joke form.

Originally Posted by Eddiar
How about this one?

This is my experience
Yeah, the temple fight was little hard to believe.
Yeah, it doesn't make sense. If a character is already incapacitated there is no valid strategic reason to keep going for him, not while there are three other who are killing your buddies.

Both in this case and in targeting the squishy wizard and otherwise weak characters.
The downed character can be restored with the help of allies and healed, so its perfectly logical the enemies would try to finish you when you are down and much easier target because of it.

Also, it doesnt happen that often at all, in majority of cases my downed character gets hit once or twice more and only in very rare occasions the enemies go for the complete kill.
Originally Posted by Surface R
No, its perfectly logical. the Ai behaves like players would behave. Suck it up.

Both in this case and in targeting the squishy wizard and otherwise weak characters.
The downed character can be restored with the help of allies and healed, so its perfectly logical the enemies would try to finish you when you are down and much easier target because of it.

Also, it doesnt happen that often at all, in majority of cases my downed character gets hit once or twice more and only in very rare occasions the enemies go for the complete kill.

Mate, it would take 3 whole hits to kill a downed character, 3 whole hits who could have potentially killed an active one who were damaging your party. Even because its true that an incapacitated character can be healed, but in doing so your enemy is going to waste one entire turn to bring him up and another one to heal him. It's just more convenient to focus on active characters and fire a single shot to re-incapacitate one who was brought back (and who made his buddy waste a turn) instead of wasting 3 attacks to permanently kill him.
Enemies dont bring up your characters and heal them.

They dont have that option at all, which is a huge advantage only the player has anyway. If enemies had that option you would spend turns to make sure any specific enemy is dead, depending on how important they are.
And no its not more convenient to change attack to another character because they leaves other characters free to restore the downed ones.

AI is good and should stay this way, and be even meaner if possible. Stop complaining about Ai doing the most basic things players would do.

Besides it does not happen too often at all. And it does create a problem for the player, because in any more complicated fight i do run up and revive fallen characters, so Ai makes good decisions in this regard.
Its not like its permanent either. I dont only have revive scrolls but even a whole convenient servant to resurrect my characters.

Something apparently nobody else in Faerun has.

Where it breaks down is situations like the following,

Gales goes down, asterion has 6 hp. The enemy uses both attacks on gale, and asterion is able to stab and kill the enemy with a vampire bite. If the enemy would have targeted Asterion he would have probably gone down and would have left me unable to win the fight because my main and shadow heart we split and in combat 80ft away
I find that not letting your characters go down to begin with is a pretty simple solution.
If you truly want a mean, smart AI, then the enemy should only target my downed party members if it has a good (~75%) of killing them before I can Help them. Since a character can take 2-3 hits before dying (depending on their death saving throw), but it only takes a single action to bring them back up, the players is favored unless the enemy can hit my downed member multiple times before I can Help them.

However, a big underlying problem is death is so easy to fix. You can buy scrolls of revivify or use skelly-boy to revive your party members. Thus, whereas in PnP the party would always try to save a downed member (you're a bit of a jerk if you let a fellow player's character die when you could have saved them), in this game you can just say "eh, I'll resurrect them later" and focus on winning the fight.

p.s. If the BG3 rules were changed (to match 5e RAW) so that the Help action only stabilized downed characters, then the action economy would much more heavily favors attacking downed party members. It would also eliminate these whack-a-mole scenarios where a party member is downed, you Help them up, they're downed again, you Help them up again, and repeat...
© Larian Studios forums